The Kasem Bible has been printed!

When we first settled in Paga on the northern border of Ghana in 1972 we had no inkling of the long journey we were then embarking upon. We started to learn the Kasem language and to observe and absorb local cultural patterns. We made plenty of mistakes, both in speaking the language (getting the tones right was a special challenge) and also in meeting expectations of polite behaviour, such as keeping the left hand firmly out of use for public interaction. We persevered through ups and downs with God’s help and in 1988 the New Testament in Kasem was published. By this time there was a growing number of readers as a result of Judy’s work on preparing reading primers and in training volunteer teachers for adult literacy classes. These classes were geared towards those who had not been able to attend school and eventually helped several thousand people to become functionally literate.

When work on the New Testament was completed and the literacy work was established under local leadership we settled in Tamale, which was 120 miles south of the Kasena homeland.  Most of our focus was on helping translation programmes being conducted in other Ghanaian languages, but because there was interest from the Kasena churches in having the Old Testament as well as the New, we ran a week’s training in translation principles for 15 or so potential translators before we left Ghana to settle back in the UK in 1990. We didn’t know if we would be going back to Ghana after our two children completed secondary school, but as it turned out …

We returned to Ghana in 2000 and discovered that Rev. Jonah Kwotua, one of those who had attended the translation training in 1990, had made a serious start on the Kasem Old Testament translation. In time he was joined by Rev. Abraham Ayiakwo and later by Rev. James Wechu. However, I had little time to help them other than an occasional one-day 250 mile round trip from Tamale to encourage and guide them. Progress in the translation was steady but not spectacular! In 2006 we returned to the UK to take care of Judy’s mum and this turned out to provide a new impetus for the translation as I could now give 4 days a week to checking over the work of the translators using software that kept each of us up to date with one another’s work. Twice a year I made a four-week visit to Ghana to work with the translators face-to-face.

And so, by God’s grace, we saw the final steps on translation of the Old Testament and revision of the New Testament completed by the close of 2013. After a year of preparation of the print-ready copy, the Bible was sent to the printers in South Korea in December 2014 and production of 8,000 Bibles was finished in March 2015. We have now received two copies by Airmail, while 8,000 copies should be arriving at the port of Tema, near Ghana’s capital city, Accra. We are pleased to see the Kasem Bible finally in print. If it is exciting for us to hold a copy in our hands, how much more will it be for the Kasena people to read God’s Word in their heart language.

Now we wait to hear from the church leaders in Kasena-land to find out when the launch and dedication events will be held. We expect this to be held off until November when the rainy season is over and people are free to celebrate. We hope to be there!

Working on final review of the Kasem Bible, May 2013 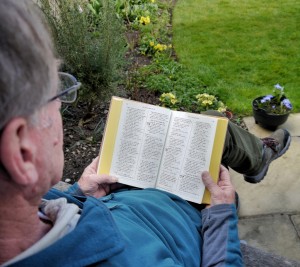 Reading the Psalms in Kasem